It’s incredibly common for someone to have a great idea for a mobile app, but what’s not so common is moving forward with that idea.

So what’s stopping people from taking the next step?

It’s actually not too hard to imagine why. After all, the app development process has so many moving pieces.

Sure, there’s the design and coding of the app to think about, but there’s also app architecture, marketing, testing, and app store submission to consider.

In short, there’s a lot involved in a mobile app’s success.

The very first step you should take before diving in head-first is understanding the terminology involved.

In this article, we’ll review the most important mobile app development terminology you need to know about when building an app. Rather than creating a daunting list of app development terms to know about, we’ll be breaking it up into sections that make sense, starting with the types of mobile apps you can build.

When you say you want to build a mobile app, what type? Let’s look at the options. When you hear the term “native apps”, this just means that the app was built for one specific platform, whether it’s Android (Google) or iOS (Apple).

There are many advantages to building an app to be native to just one platform. For example, native apps tend to have a more optimal user experience and better performance since it’s designed for one platform. Unlike native mobile apps, hybrid apps can be used on various platforms while only requiring one codebase.

It can be installed on devices, looks and feels like a native app, and works by accessing the device’s hardware and internal API

In short, it’s a blend of native and web apps.

Having just one codebase that works on several platforms means less development time, which of course will save you money, but hybrid apps aren’t as fast when compared to native apps.

Web apps look and feel like native apps, but users access them via their internet browser. So they aren’t native to any particular system.

They also don’t need to be downloaded or installed.

Web apps require an internet connection in order to be accessed, unlike some mobile apps that can work online.

Unlike other types of apps, web apps are built using HTML, CSS, and JavaScript, which means it’s an easier type of app to develop. Progressive web apps, or PWAs, are web apps that come with some extra features that help provide the best mobile user experience.

It can use most native app features, offers faster services due to caching, works offline, and it’s more discoverable due to SEO since it resides in web browsers.

The design has to do with the appearance of a mobile application. Here is some terminology you’ll come across that relates to mobile app design. UX refers to the overall experience a user has with the mobile application. Whether or not an app has good or bad UX is determined by how easy or hard it is for them to navigate the app and complete tasks.

Good UX involves creating an intuitive user flow that encourages them to take an action, like click a button or buy something. UI is all about the app’s layout and how it looks, which of course will affect the UX.

This includes color palettes, animations, graphics, buttons, typography, and other elements in the app.

These design elements are important in creating a good user experience and should take into account the target audience. 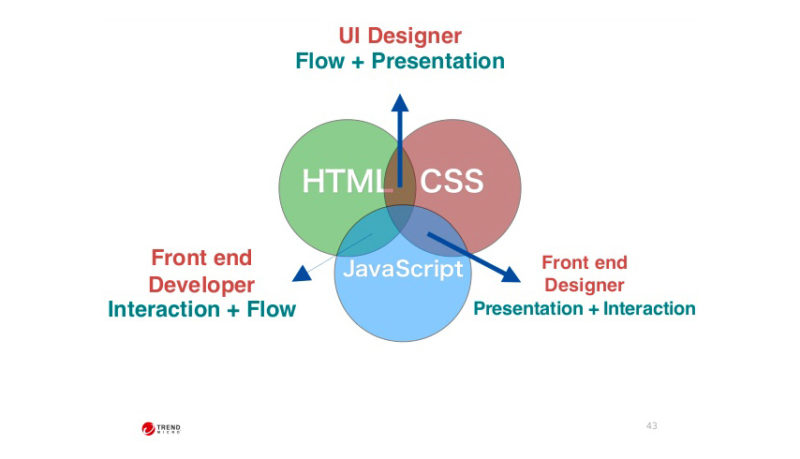 A wireframe is a representation of an app’s design, but it’s low-fidelity. It’s a very basic visual depiction of the app that serves to convey high-level concepts of the app’s functionality.

A mockup is a step up from a wireframe and is a more realistic visual design that better represents how the app will look. A prototype is a high-fidelity, interactive simulation of the mobile application.

Prototypes are often used to get feedback from real users about the app and the experience they have with it.

A prototype takes more time to produce than wireframes and mockups, and includes navigation and interactive elements.

So you might be familiar with some development terminology like coding and programming languages, but there’s much more you should know about. 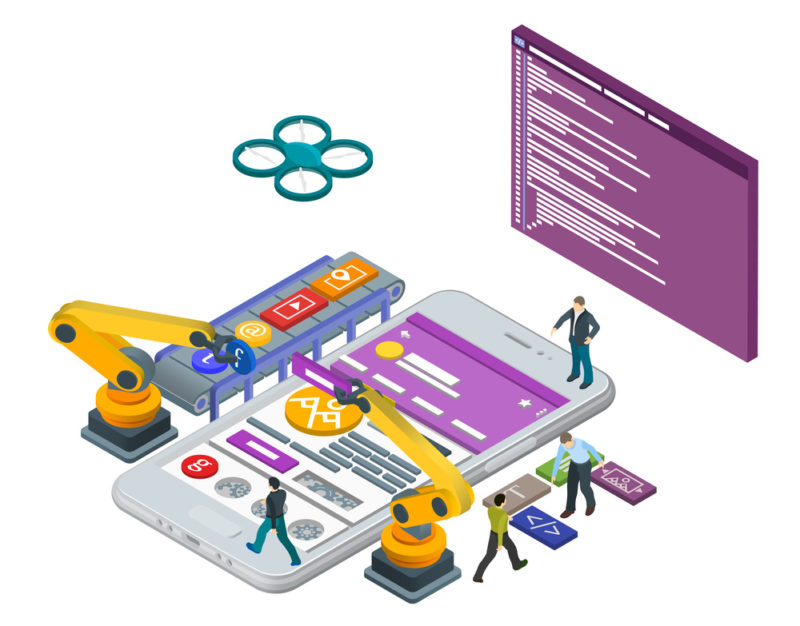 Frontend development focuses on the visual elements of the app that users interact with, also referred to as client-side.

This includes developing features like navigation, buttons, and pretty much anything that enhances the app’s usability.

The frontend uses HTML, CSS, and JavaScript to run smoothly.

Backend development focuses on what users don’t see, also referred to as server-side since it addresses server-side application integration and logic.

Backend developers are in charge of things like applications, servers, and databases, which require the use of backend programming languages like Java or PHP. An API is essentially a structured way in which programs talk to each other to accomplish different things.

It’s a way for programs to interact with other programs and can be created for applications, libraries, and operating systems.

One example of a common API is weather data. Instead of coding a weather feature from scratch, mobile apps can use available weather data APIs to integrate into their app.

When building an app, you’ll need to know what OS you’ll be building it for. The OS is the software running on mobile devices, such as Android for Google devices and iOS for Apple devices.

You’ll often hear the mobile app terms “OS” and “platform” used interchangeably. They essentially mean the same thing and are referring to the OS software. The source code of your app is a set of instructions written and developed by your app’s programmers using a programming language. In other words, it’s the source of a program. This is a set of development tools and programs your developers can use to create applications for specific platforms.

This programming package can include a wide variety of useful things, like documentation, libraries, code samples, guides, and more to aid in the development process. 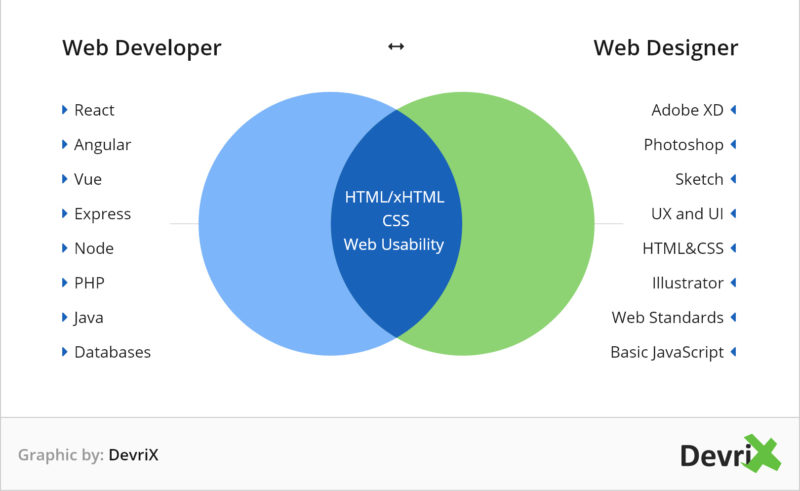 An APK is a set of tools used by developers that’s specifically for the Android environment. It’s what Android uses to distribute and install mobile applications.

Testing is an extremely important step in the app development process. Let’s take a look at some common app testing terminology. QA is the process of ensuring that you’re delivering the best possible product to your users through testing.

This process is important because it prevents bugs and mistakes from appearing in a mobile app, so it should be carried out throughout the development process.

TDD is an important element of app testing that involves creating test cases to validate what the code will do.

This is a type of testing that confirms that new code doesn’t have any adverse effects on existing code and features. This is a term you’ll be hearing quite a bit when developing an app, and it simply refers to any errors or unintended behavior in the app. Bugs are inevitable, which is what makes testing an app so important. Emulators are software that allows you to mimic a specific device on your workstation for testing purposes. After all, there are tons of Apple and Android devices out there, so you can’t expect to purchase them all for the sake of testing.

The Android Emulator is one popular example that allows you to set up virtual Android devices on your workstation for testing in the development cycle. Beta testing is the process of testing a pre-release, nearly finished version of your mobile app. Your target users will evaluate your app to ensure it meets your testing goals.

Marketing is another important phase of the app development cycle. So let’s go through some common terminology related to marketing.

A conversion means that your user has taken an intended action that benefits your business, such as downloading your app or making an in-app purchase.

Retention in mobile app marketing is about keeping your users happy so they don’t leave or abandon your app.

Some strategies that are common to keep users coming back include in-app messaging, push notifications, surveys, and loyalty programs.

Push notifications are a great way to keep users engaged with your app. You can send reminders, alerts, requests for feedback, promotions, and more. 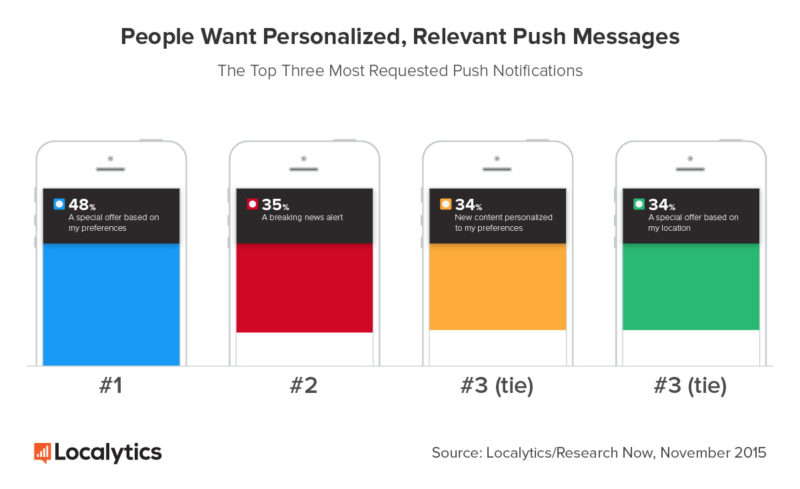 PRO TIP:
Be careful how you use push notifications, as too many can come off as annoying.

ASO is the ultimate way in which you can improve your app’s visibility in app stores like Google Play or Apple’s App Store.

There’s a variety of factors that can affect an app’s ranking in an app store, like images, keywords, descriptions, and much more. The target audience is exactly what it sounds like, it’s your app’s intended audience. Remember, your app shouldn’t be developed and marketed to everyone. Your app should be created for a very specific demographic, or group of people.

Understanding your target audience is crucial to create an effective marketing campaign for your app. 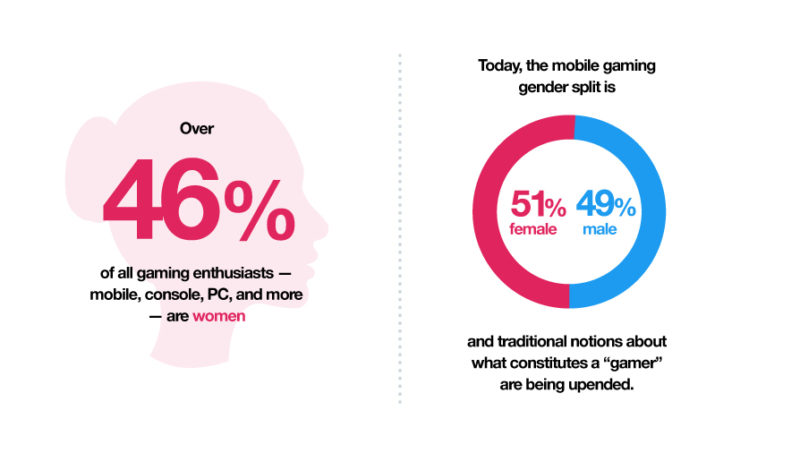 As you can see, there’s a lot to learn about when it comes to mobile app development, and learning relevant terminology is a great first step.

After all, when you discuss your project with developers, investors, and other stakeholders, you’re going to want to know not only what they’re talking about, but how to effectively communicate various aspects of your project.

With that said, it’s hard to know everything, especially when it comes to the more technical side of your project.

In our Simple Starter package, we do the heavy lifting by creating a technical write-up of your mobile app idea which can then be presented to a development team.

This package also includes mockups and thorough research on your target audience so you’re ready to take the next step.

Have you created a mobile app before? What was the biggest challenge you faced?